Wasted years, broken dreams, wrecked relationships…whatever your loss may be, look to the Lord for your much-more restoration! Join Joseph Prince in this three-part series as he shares how you can position yourself to receive God’s incredible restoration for your losses.

She was young, married for a few years, and looking forward to a blissful family life with children of her own. Then, the unthinkable happened—her husband suddenly died. Overnight, all her hopes came to naught; her future, uncertain. Although her mother-in-law urged her to return to her own town to start afresh, the young woman refused. Clinging to her mother-in-law, she said, “Wherever you go, I will go. Wherever you lodge, I will lodge. Your people shall be my people, and your God, my God.”

With these words, one of the most beautiful love stories in the Bible—the story of Ruth—unfolds. Beyond being just a love story (that is also a picture of our redemption in Christ), it is also a heartwarming story of God’s amazing restoration.

When Ruth followed Naomi, her mother-in-law to Israel, she soon found herself in a less-than-ideal position. She was a Moabitess among a people often in conflict with Moab, and had no husband to protect her. In the natural, it seemed as if the odds were stacked against her.

But Ruth didn’t dwell on her unfavorable circumstances. Her declaration of her faith in the God of Israel revealed her dependence on the Lord, whom she looked to for favor and divine opportunities.

“Please let me go to the field, and glean heads of grain after him in whose sight I may find favor,” she said to Naomi one day (Ruth 2:2). Her trust in the Lord as she embarked on the ordinary task of finding work to support her mother-in-law and herself became her launching pad to God’s incredible restoration in her life.

First, God gave Ruth favor to glean the barley harvest in the field of Boaz, a wealthy man who happened to be a close relative of her late husband. Boaz was extremely kind to Ruth, allowing her to gather more than enough grain in his field for both her and her mother-in-law’s daily needs. But God had more in mind than mere survival for Ruth. He blessed her with a husband—Boaz himself—and with a child, Obed, who became the grandfather of King David and whose name was recorded in the ancestry of Jesus Christ. Ruth herself is named in the genealogy of our Lord Jesus.

When it seemed impossible in the natural, Ruth’s life went from empty  to full. Imagine going from having no family to having a loving husband and son, from being destitute to being well-provided for. And from being an outcast to being not just an accepted and well-loved member of society, but part of the lineage of the Messiah Himself. What a turnaround! What amazing restoration!

Maybe you can identify with what Ruth had gone through before she met Boaz. Maybe you’re at a place where your hopes have been crushed. Perhaps a series of events have shattered your dreams and left you with a bleak future. Maybe you’re saying to yourself, “It’s over for me!”

My friend, I have good news for you today: God wants you to know that it’s not over.

His powerful restoration is on the way! Take heart as you hear His Word to you:

…I will restore to you the years that the swarming locust has eaten, the crawling locust, the consuming locust, and the chewing locust… (Joel 2:25)

Beloved, because our Lord Jesus has purchased every blessing, including restoration, for you at the cross, you can believe God to redeem all the time that has been wasted and lost. God’s heart is to restore to you whatever the locust—a picture of the enemy—has eaten, especially your lost years. If you’ve been living in regret over years lost to addiction, depression, or a never-ending series of failures, God is willing and able to turn things around for you.

No man can do this but the Lord. He lives outside time, and can supernaturally restore to you all the wasted time you have spent in fear, worry, doubt, guilt, condemnation, sickness, and bondage. Whether you have lost precious time, a relationship dear to you, or if you’ve suffered a debilitating illness that has robbed you of your health or your youth, let His Word strengthen your heart today.

Our God is a God of restoration, and He is most able and willing to restore whatever you have lost!

Let me encourage you with a testimony that I received from Stephie to show you that God, who changed the life of Ruth, is still restoring precious lives today.

Stephie was just eight years old when her parents were divorced. It broke her heart and started her on a journey of deep insecurity. She left school at the age of thirteen, began taking drugs and watched her life spiral out of control after that. By the time she was sixteen, she was in prison, after having tried every new drug available and selling them at the nightspots she worked at. In and out of prison over  the next few years, she always returned upon her release  to the drugs that held her captive. Then one day, Stephie’s addiction got to crisis point—she developed a severe infection resulting in a drastic loss of weight, loss of hair, and a loss of strength and ability to work on a business she’d started. In sharing what life was like for her during that time and how her turnaround happened, she said:

I often felt angry with myself for what was happening, and I would flush the drugs down the toilet bowl. However, I would give in within half a day. I knew I needed help but didn’t know where to get it.

Then, a friend brought me to New Creation Church and that changed my life forever. After attending church for a few weeks, I woke up one morning with clarity of mind. I finally realized that the “cursed” life that I thought I had was already taken away from me. I had found grace.

With this fresh revelation, I prayed to God to help me overcome my addiction. Whenever I felt the urge, I just declared, “I am the righteousness of God in Christ.” I stopped relying on my own willpower and just told God, “I cannot, but You can.”

My drug addiction grew worse initially and my family and boyfriend lost all patience with me. The small business I had at that time was also not doing well. Everything in my life was so wrong. Still, I continued praying and telling God, “I really don’t know what to do, but I am relying on You.”

One fine day, the drug that I was addicted to ran out of stock. I was desperate and worried about the effects of withdrawal on my body. My sister, who also attends New Creation Church, prayed for me and partook of the Holy Communion with me.

Amazingly, after two weeks, I still did not have any withdrawal symptoms, and I realized I was totally set free from drug addiction!

The infection I was suffering from was also healed during one of the extended worship sessions led by Pastor Prince. And when the drugs I was addicted to came back into supply a month later, by God’s grace I no longer had any desire to go back to them!

Today, I am happily married with two kids and blessed with a thriving business. I am healthy, my hair has grown, and I feel and look so much better. I am so blessed to also be serving in church.

I am so grateful and humbled by the fact that God did not spare His own Son for my sake. I can’t imagine where I would be without my Savior, the Lord Jesus Christ.

What a precious testimony of how our Lord Jesus can restore all that the locusts have eaten! If you, like Stephie, have experienced years lost to addiction, sin or sickness, don’t remain in discouragement or become bitter. Like Stephie, choose to tell Jesus, “Lord, I cannot, but You can. You can restore to me time that’s been lost. You can restore to me everything the locusts have eaten.” And God will surely bring about His much-more restoration of years lost, His renewal of your mind and body, and even a deeper relationship with Him. He who loves you and gave His only Son to die for you will make things right, and give you more than what was lost or stolen. Whatever the enemy meant for your harm, God can take those experiences and turn them around for your good! 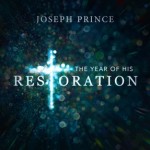 The Year Of His Restoration

Therefore He who supplies the Spirit to you and works miracles among you, does He do it by the works of the law, or by the hearing of faith? Galatians…