Wasted years, broken dreams, wrecked relationships…whatever your loss may be, look to the Lord for your much-more restoration! Join Joseph Prince in this three-part series as he shares how you can position yourself to receive God’s incredible restoration for your losses.

Let me show you from the scriptures that when God restores something, His restoration is always greater in quality or quantity or both. Whatever the enemy has stolen from you, you can believe God for a 120 percent restoration.

Because it is based on the principle of restitution in the law of the trespass offering found in Leviticus 6:4–5: “then it shall be, because he has sinned and is guilty, that he shall restore what he has stolen, or the thing which he has extorted, or what was delivered to him for safekeeping,  or the lost thing which he found, or all that about which he has sworn falsely. He shall restore its full value, add one-fifth more to it, and give it to whomever it belongs, on the day of his trespass offering.”

Here, we see God’s law detailing what a person must do to provide restitution to someone he has injured. Notice this  law states that he “shall restore its full value, add one-fifth more to it, and give it to whomever it belongs…” The full value of whatever was lost, defrauded, or stolen plus one-fifth is 120 percent of the original value. Now, this principle of restoration was under the old covenant of the law.

How much more we who are under the new covenant of grace—a far better covenant with God, based on better promises (Heb. 8:6)—can trust God not just for a 120 percent restoration, but much more!

Notice, also, that the person brings his restitution on the day of his trespass offering. The trespass offering is a picture of what Jesus did for us at the cross. He became our substitute and was judged in our place for every trespass we committed so that we can freely receive every blessing of God, including the blessing of His much-more restoration.

If you have accepted Christ as your trespass offering, then much-more restoration is coming your way. If the enemy has stolen from you or defrauded you of the best years of your life, then in that very area that you have suffered loss, God is going to restore to you more than you had before. He is going to restore to you the years the locusts have eaten, and according to His principle of restitution, make you a gainer.

Your best days are ahead of you!

EXPECT TO BE A GAINER

In the same way the Lord didn’t want Ruth to just survive, He doesn’t want you to just live through a miserable marriage. He wants to turn it around and restore to you a loving, intimate relationship with your spouse. Similarly, He doesn’t just want your business to stay afloat, He wants your business to thrive! He doesn’t just want you healed, He wants you healthier than before! Our Lord Jesus never brings us out the same. He will increase, improve, promote, and make everything better.

Even if you’ve made some poor decisions, don’t feel condemned. Instead of indulging in self-pity or regret, turn to your Savior and say, “Lord, restore!” and expect things to change in your favor. When you put your trust in Him, nothing in your life is beyond restoration.

Despite how impossible the situation looks, God is for you and will never give up on you!

If you feel you have been have robbed—of good health, of experiencing wholeness in your relationships, of opportunities in your workplace or career, know and believe that your loving Savior’s heart for you is to restore to you much more than you have lost. Believe that He can and will make you a gainer because of that loss. Let me show you another Scripture to establish your heart in this truth.

Look with me at Exodus 22:1—“If a man steals an ox or  a sheep, and slaughters it or sells it, he shall restore five  oxen for an ox and four sheep for a sheep.” What do you notice—where the loss is greater (an ox compared with a sheep), the restoration is also greater! God is in effect saying, the greater your loss, the greater His restoration to you will be! It may come through the agency of man, but it is the Lord who plans, orchestrates and brings His much-more restoration to pass in your life. And can you imagine the joy of the man who received five oxen when he had originally lost only one? He was probably happy to have lost that ox because he became a gainer after such a restoration.

When you put your trust in Him, nothing in your life is beyond restoration. Despite how impossible the situation looks, God is for you and will never give up on you! 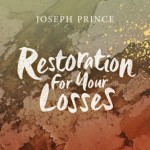 Restoration For Your Losses

I grew up in a religious family and was abused by my mother for years. I had nightmares, was in depression, and suffered multiple physical ailments. Even though I was…