Tired of living a defeated life where you are bound to addictions, depression, lack, condemnation, and guilt? God wants you to reign in life through two gifts that Jesus has freely given to you—grace and righteousness. Join Joseph Prince in this three-part series and be set free from whatever bondage you are struggling with.

Many people aren’t sure what God wants for them. But it’s really quite simple: God wants us healthy, whole, well provided for, and enjoying life to the fullest! That’s why He wants us free from any kind of bondage. Bondages, be they paralyzing anxieties, depression, or addictions, only rob us of the enjoyment of all that He has in store for us.

If you are in bondage to something, I want you to know that Jesus is your answer.

My friend, God so wants you to live a life of freedom and victory that it moved Him to send His beloved Son, Jesus, to die on the cross for you so that you may live an abundant life. Today, if you are not experiencing this abundant life because you are in bondage to something, I want you to know that Jesus is your answer. His gifts of abundant grace and righteousness are what you need to empower you to break free from whatever is holding you captive!

I have received many testimonies from people from various parts of the world, who eventually found true freedom from their bondages through the Lord’s abundant grace and gift of righteousness. Some of them were bound by addictions—to pornography, alcohol, nicotine, and drugs—while many were simply defeated and paralyzed by depression, fears, guilt, and condemnation.

What they shared with me about their struggles and pains confirmed what I have always believed: no Christian likes to sin, let alone be hopelessly chained to sin. The Lord calls us His sheep and no sheep—not even a lost one—likes to wallow in mud. Also, everyone, Christian or not, longs to be free from defeatist thoughts that hold them back from living a purposeful and powerful life.

The Pain Of Addiction

Frustrated, yet unable to help themselves, these people told me how they were bound for ten, twenty, thirty years, some practically their whole lives, before they were set free. The shame and condemnation they felt were often so overwhelming that many of them became depressed and suicidal. Some even started to develop sicknesses and marital problems as years of substance abuse and self-condemnation took a toll on their bodies and marriages.

These folks also told me how they hated living in such captivity and seeing what it was doing to themselves and their loved ones. It was only when they discovered and leaned on the grace of God to deliver them that they found lasting freedom. As these precious people heard and kept hearing about God’s abundant grace and the gift of righteousness that was theirs through Christ’s finished work, their addictions supernaturally fell away. A welcomed sense of wholeness and joy replaced the emptiness, frustration, and shame.

Let me share with you a few of the testimonies that I have received in the last twelve months alone (I have left their names out to protect their privacy).

A brother from California in the United States (US) wrote, “My marriage was not going well. I was in bondage to pornography and had gotten into Internet affairs without my wife’s knowledge. We quarreled a lot—several times a day about almost everything…But when I heard you ministering on what Jesus did at the cross for me, I felt a heaviness inside me just leave. Not long after that, my wife said that I looked different and talked differently. I have not had a desire to watch porn ever since…My wife and I have had a 180-degree turnaround in our relationship—we now enjoy great conversations and have had very few disagreements since the release. We have been married for forty-one years, yet it feels like we just got married yesterday.”

I couldn’t give up my addictions through my own efforts, but through Christ, I have.

A sister from Virginia in the US shared, “…in college, I began to have a losing battle with depression. I was under therapy and medication, but the medication only provided temporary relief and had to be constantly increased. I ended up gaining weight and feeling more miserable. I fought this losing battle for seven years…I couldn’t even get up in the mornings because I was so tormented in my mind. Then, my mum gave me your book, Destined To Reign. After reading it and accepting God’s love for me, and trusting Jesus and His finished work, I was totally and miraculously healed. After reading the book, I would just say, ‘God, I am not even going to try today…You live the victorious life for me. I know that I cannot overcome these thoughts on my own, but I can rest in You.’ I now live a life of joy and peace that I never imagined was possible for me!”

Here is yet another testimony from a brother in Australia: “I have just given up smoking by following what you’ve taught in your books and DVDs (about being conscious of and confessing my righteousness in Christ) whenever I was tempted to smoke. I have also been set free from twenty years of drug and alcohol abuse, and am free of paranoid thoughts. I couldn’t give them up through my own efforts, but through Christ, I have.”

The Power Of His Grace

To Jesus be all the glory! What many years or even decades of self-effort could not do, the Lord’s abundant supply of grace and His gift of righteousness did, sometimes in an instant, sometimes over a period of time.

It is grace, not the law, that empowers us to overcome every sin!

I believe that this is where the church has missed it. Instead of preaching grace and the gifts of righteousness and no condemnation in Christ to set these people free, it has been preaching the law to them, dousing them in even more sin-consciousness, guilt, and condemnation. In our desire to see believers overcome sin and addictions, we have failed to realize that the biblical key to reigning over sin is not in preaching the law but in preaching grace— for sin shall not have dominion over us when we are not under the law but under grace (Rom. 6:14). Beloved, it is grace, not the law, that empowers us to overcome every sin and transforms us beautifully from the inside out!

What I really love about all these testimonies is how these folks have experienced true change. They are no longer smoking, abusing drugs, or watching pornography not because they have to, but because they don’t want to—the desires or urges are not even there anymore. It’s one thing to not do it because of a rule or law, but it’s quite another thing to not do it because you don’t have any desire to, even when nobody is looking! That’s true heart transformation. That’s the power of grace! 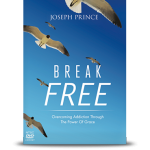 Enjoyed reading this article? You can find out more in this DVD

Break Free! Overcoming Addiction Through The Power Of Grace

I can do all things through Christ who strengthens me. Philippians 4:13 Under the old covenant of law, man works for God. That’s why the law states very clearly, “You…