Focus On His Grace, Not Your Failures

A precious couple in their late forties from New Jersey wrote to me recently, sharing their testimony of how against all odds, God caused them to conceive the child that they had wanted for more than eleven years. They had tried all means—including IVF (in vitro fertilization)—to conceive, but were finally told that it was medically impossible for them to ever have a child on their own.

One day, they came across my television broadcast and heard for the first time the message of God’s grace and how Jesus had already paid the full price for them to have whatever they needed. It was a message that this couple hungrily grabbed hold of and kept feeding on. Not long after this, they received amazing news that the wife happily shared with me: “Pastor Prince, I am now six weeks pregnant. Praise the Lord!”

Let me share with you another awesome breakthrough experienced by another brother who has also been following my broadcasts. This man described how he had tried—and failed—many times to overcome alcohol abuse and sexual addictions.

It’s God’s amazing, superabounding grace that will give you victory over your weakness.

“Nothing worked until I discovered and had a revelation of the gospel of grace through your preaching and through reading your daily devotionals,” he shared. “And when I left my struggle in God’s care, I became free and whole. By the power of the Holy Spirit and God’s grace through His Son, today, I am a free man. I say this to the glory of God—I could not on my own stop any of these bad habits.”

What gave these precious souls their breakthroughs?

Beloved, whatever the challenge you are struggling with today, victory can be yours too. As the above testimonies show, it’s God’s amazing, superabounding grace that will give you victory over your weakness and transform your life for His glory!

Your weakness or demerit may be an area of struggle right now, but according to my Bible, it is also the perfect target and right-now residence of God’s superabounding grace.

Romans 5:20 tells us clearly, “where sin abounded, grace abounded much more.” What this verse is saying is that where there’s been “a failing to hit the mark” (definition of “sin” by Thayer’s Greek Lexicon), that’s right where God’s grace—His unmerited favor for our empowerment and victory—is in superabounding measure.

Isn’t that amazing? Contrary to traditional thinking, God’s grace does not abandon you when you miss the mark. What a comfort and source of strength it is to know that His grace doesn’t leave us, but is right in the midst of our painful weaknesses, failings, and less-than-perfect situations!

Understanding Romans 5:20 is key to allowing the grace of God to transform your area of struggle into a testimony of His goodness and power. So allow me now to bring out the richness of this verse by going into its original Greek meaning.

God gives you a superabundant measure of grace for your area of challenge.

The word “abounded” here is the Greek word pleonazo. Pleonazo simply means abundant or to increase. Comparatively, the words “abounded much more” are a single Greek word huperperisseuo. Unlike pleonazo, huperperisseuo means to abound beyond measure, to abound exceedingly, or to superabound.

Perisseuo already means overflowing, but with the prefix huper, from which you get the English word “hyper,” it becomes huperperisseuo—SUPERABOUNDING. Greek scholar Kenneth Wuest captures all this well in his translation of the verse: “where sin increased, grace superabounded, and then some on top of that.” How cool is that!

What does all this mean for you?

My friend, it means that God doesn’t just give you an equal amount of grace to match the severity of your weakness. No, He gives you a superabundant measure of it! In other words, in your area of challenge, God has already released a disproportionate or far greater measure of His grace so that it will totally swallow up your sin or weakness and gloriously transform your life!

Change Your Focus—See What God’s Doing

What is your area of weakness today? Perhaps it’s a problem with your temper, or you’re struggling with an addiction that’s causing you to feel much guilt and shame. Maybe you’re looking for a job and are acutely aware that you don’t have the qualities your dream job requires. Maybe you have a tendency to make bad choices in key decisions, and that has brought about unwanted consequences in your life.

See with the eyes of faith that God in His grace is doing something exciting, something extraordinary, something beyond your wildest dreams!

My friend, instead of allowing the enemy to drag you around and down with his devices, realize that in the very area of your challenge or weakness, God has already poured out His abundant grace on you, and has already begun something wonderful in your life.

Even now, His grace is present in superabounding measure in your situation to enable you to overcome your challenge and experience your blood-bought victory in Christ. It’s time to see with the eyes of faith that God in His grace is doing something exciting, something extraordinary, something beyond your wildest dreams!

See Your Situation Through The Eyes Of Faith

My challenge to you today is to see your situation through the eyes of faith. Don’t fall for the enemy’s tricks or threats and become discouraged. Know that whatever the devil provokes or starts is simply an attempt to stop or disrupt what God has already started. We see this repeatedly in biblical accounts of God’s heroes of faith.

Take Joseph in the Old Testament for example. The enemy incited jealousy in Joseph’s brothers and triggered a plan to have Joseph sold off by his own brothers to Egypt when God had already destined him to save his family and all of the then known world from terrible famine. God used everything that the devil threw at Joseph to become stepping stones till he walked out every detail of his God-ordained destiny.

Similarly, when we’re first introduced to Apostle Paul in the book of Acts, we don’t see the extraordinary apostle, missionary, and pillar of the Christian faith. No, we see Saul, “Pharisee of Pharisees” and “chief of sinners” doing his best to persecute the early church. Yet, God had already called him from his mother’s womb to preach and reveal the gospel in many places with much revelation and power, and to pen a considerable portion of the New Testament.

When did the trajectory of his life change? When he discovered the person of grace Himself, Jesus, as he was on his way to Damascus to arrest even more Christians!

What I want you to see is that the enemy’s strategy is to attack you in the area that he knows God has a great plan for you. For example, if you’ve been dealing with a chronic condition in your body, I encourage you to see God’s plan for you to walk in a degree of health beyond anything you’ve ever experienced before.

If you or your children have been succumbing to the flu every few weeks, see that God has not only already injected a dose of His divine healing and health into your bodies, but is also right now releasing an anointing on you and your household to walk as champions and instruments of encouragement to many others. Begin to thank Him for it every day, knowing that what He has started, He Himself is able to finish (Phil. 1:6)! 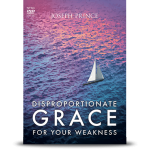 Enjoyed reading this article? You can find out more in this DVD:

Disproportionate Grace For Your Weakness

My covenant I will not break, nor alter the word that has gone out of My lips. Psalm 89:34 When God promised to give Abraham land, Abraham asked, “God, how…