Many of you know that I was a stutterer in high school. One teacher would always make me stand up and read in class for the sheer pleasure of hearing me stutter—“Th th the…aa annual…nual…ra ra rain…fall fall…in in Brazil…” Everyone would laugh at me and my ears would burn red with embarrassment. And the more I tried to speak normally, the worse it got.

Little did I know then that God had already released a superabundant measure of His grace in my area of weakness. I mean, His grace didn’t just bring an end to my stuttering. No, it was so bountiful that it transformed me into a preacher who can’t stop talking about Jesus!

My stuttering was just the enemy’s attempt to stop what God had already begun in my life. If only I could have seen what God had already started in the very area of my weakness, I wouldn’t have been so discouraged and embarrassed. You’ve probably heard me say that I was born to preach on the rest and grace of God. I now know that His grace was given to me in abundant measure even when I was in my mother’s womb. I was called to preach even before I was born!

The greater your challenge, the greater is His grace in that area to transform it for His glory.

My friend, in your area of weakness, the Lord has already lavished you with an overwhelming measure of His grace. The greater your challenge, the greater is His grace in that area to transform it for His glory. Maybe you’re having major challenges with your rebellious teenager now. Well, don’t just expect him or her to merely be more obedient. Expect this child to also be on fire for Jesus. Expect this child to also grow up into a successful person, a loving spouse, and a responsible parent, full of the wisdom of the Lord!

So believe that the Lord’s superabounding grace or favor is already in your situation to do for you exceedingly abundantly above all you could ask or dream of (Eph. 3:20). Be conscious of this favor every day. Keep confessing it. Keep expecting the best to come out of your seemingly hopeless situation. It may not happen overnight, but God is already working in your life. He’s piecing it all together into a beautiful masterpiece. So take your eyes off the negatives and see with eyes of faith the good that the Lord is already doing in your life!

God Can Still Use You

If someone had told me during my teenage years that I would one day preach to thousands and have a successful television ministry, I would have thought that he was out of his mind. How could God use a stutterer? Wouldn’t He be better off choosing someone who was eloquent and not shy?

Always remember that where sin (or missing the mark) abounds, God’s grace superabounds.

Many people think that God cannot use them because they have certain faults or are struggling with certain weaknesses. You may have thought, I have a temper problem so I don’t think that God would ever want me to serve Him. My friend, always remember that where sin (or missing the mark) abounds, God’s grace superabounds. His grace is His unearned, undeserved, unmerited favor. So it’s in the very area of your weakness that God’s superabounding unmerited favor can flow and transform your life for His glory!

Now, please don’t misconstrue what I’m saying here and think that this gives you the green light to deliberately indulge in sin or the area of your weakness so that you can enjoy God’s superabundant grace. That’s like saying, “Let’s all deliberately contract a disease so that we can enjoy the pleasures of God’s healing.” That’s certainly not what I’m advocating.

What I’m advocating is really for those who have been told that because they have failed somewhere, they are like a bird with a broken wing—they’ll never be able to fly again. That’s the world’s belief, folks. But God says, “I’ll not just heal your wing, I’ll make you an eagle. You’ll fly again and you’ll fly higher than you ever did before! Simply depend on My superabounding grace!”

My friend, don’t let the demerits you see in yourself today talk you into believing that God has no use for you. Someone may have told you that you’re a “hopeless case,” or that you’ll never amount to anything. Listen to me. Forget the naysayers. God has a wonderful plan for your life. He has called you from your mother’s womb for a divine purpose.

Whatever your weakness or fault, put it into His hands. He can take it and use it to take you higher and make you stronger than you’ve ever been before for His glory. When you depend solely on His abundant grace, you don’t have to stay stuck at where you’re at in life. His superabounding grace has already been supplied to you through the sacrifice of His Son to help you fulfill your God-given dreams!

Grace Is Attracted To Your Demerits

“My grace is attracted to the demerits of man,” the Lord told me once. How true! God’s grace is attracted to our minuses. Have you noticed? Jesus didn’t have a problem showing grace to lepers, the sickly and demonized, tax collectors, and prostitutes. But He had a problem with the self-righteous Pharisees, or those who believed that they had it all together and didn’t need the Savior. During His earthly ministry, Jesus moved among people full of minuses and demerits. They welcomed Him because they saw their need for Him, and they found His grace of much effect to them.

So be encouraged, my friend. Your weaknesses and disqualifications, demerits and minuses, actually qualify you for God’s superabounding grace. If you’re facing challenges as a single parent, know that His grace is upon you in double portion to be both an excellent mother and an excellent father to your children. He’s also giving you the anointing, strength, and wisdom to meet the demands of both family and work.

If you’re addicted to nicotine or alcohol, His grace is already there for you to kick the habit for good. His grace is even there to repair any damage done to your body. If you’re always last in class, know that His grace is there to change those Fs into As! Not only will you do well academically, but you will also have wisdom beyond your years!

No mistake is ever too great for His oversupplying grace.

Beloved, you may have made some bad decisions in life and may be reaping the natural consequences. Whatever the situation you may be in, while the world may tell you that it’s your fault and treat you unkindly, the truth is that God still loves you and has good plans for your life (Jer. 29:11 niv). He doesn’t condemn you. He wants to help you. No mistake is ever too great for His oversupplying grace. He alone can take the mess of your past mistakes and transform it to give you a beautiful future. Where sin abounds, His grace abounds much more. And if you say, “I can’t do it, Lord,” He says, “I can. Watch Me!” 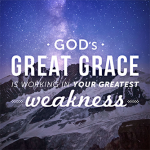 God’s Great Grace Is Working In Your Weakness!

I had a nagging pain on my right shoulder for about a week or so and assumed it was due to a bad sleeping posture. I was then reminded by…