I was reminded of Pastor Joseph Prince’s teaching on Psalm 91 after being protected from a fatal fall while mountain climbing recently.

To reach the summit, one has to climb up and down a few peaks, scale steep vertical surfaces, maneuver razor-shaped rocks and risk steep drops.

I did Tabur East on one day and Tabur West on the next. It was on Tabur West that I had what could have been a fatal accident.

I was climbing down one of the peaks of Tabur West when I lost my footing, slipped and fell some distance downwards to a narrow ledge that was less than a foot and a half in width.

It happened so fast. One moment, I was hugging the steep surface of the ridge, and the next, I was sitting on my butt in the opposite direction—my back against the sheer wall of the ridge and my lower legs dangling over the edge.

Beyond the ledge was a 300-meter plunge down a ravine.

My friend, who was next in line to make the descent, saw me slip and screamed.

My initial thought was, “Oh my goodness, this is so embarrassing!” I quickly got up, said a quick prayer of thanks to Jesus and continued on with the climb.

Along the way, the same friend came to me and asked me how I had turned my body as quickly as I did when I fell. I simply said, “I don’t know,” shrugged it off and continued on.

Honestly, my only concern then was whether my fellow trekkers would invite me on their future trips after they’d seen my fall.

Beyond that, the fall didn’t affect my concentration or composure as I continued with the climb for another hour or so to the highest peak of the mountain ridge before descending to base.

It was only when I reflected on the whole incident—a day after the climb—that the reality of what had happened and what could have happened dawned on me.

I was carrying a haversack packed with water and other necessities (amounting to a significant load) while doing the climb. We climbed the mountain as the locals did—just with our hands and feet, with no safety measures like ropes or belaying.

When I slipped and fell, my body in a split second somehow turned 180 degrees on its own accord, enabling me to land safely on the narrow ledge with my back and the load safely against the steep ridge.

If my body had not turned, I could have just landed on and fallen backwards off the narrow ledge because of the load—and plunged some 300 meters down the steep drop.

The consequences could have been fatal.

I realized then that it was Jesus who had spun my body around during the fall. I know I could not have done it myself because my reflexes are not that fast. I have never been a physically active person from my youth and only started picking up trekking last year.

I’ve also never done rock climbing before and Bukit Tabur was my first such climb. I don’t even know how I was able to remain calm and just continue on with the rest of the climb after I had fallen.

My friend, who had witnessed my fall, was much more shaken than I was and for much longer. The only injuries I sustained were very minor abrasions on my left elbow.

Honestly, after such a close brush with death, being alive and well just seem so surreal.

Thanks to Pastor Joseph Prince, I know I am loved by Jesus and I owe it all to Him for His protection. I am so grateful that Jesus not only kept me calm and restful, but He gave His angels charge over me, to keep me in all my ways! 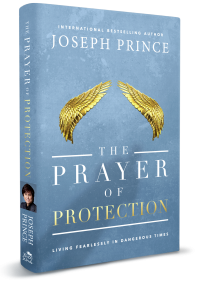 Read more of such testimonies in Pastor Joseph Prince’s new book, The Prayer of Protection

For four years, I have been listening to Pastor Prince’s messages whenever I commute to and from work, and would replay my favorites until the Lord’s love saturates my spirit….