Challenges can seem like a looming mountain, intimidating us with a sense of fear and defeat. However, God has a simple solution for you to enjoy His presence in the midst of your crisis—and watch His avalanche of supply break down those daunting problems. Join Joseph Prince in this three-part series as he unveils to you the power of praise.

When my daughter Jessica was a baby, I remember her being sick one time with a raging fever. She was crying ceaselessly throughout the night. My precious, adorable baby girl was in so much discomfort it broke my heart. Wendy and I had done what we could in terms of doctors and medicine. I had laid hands on my child and prayed for her healing. I had rebuked the sickness, bound it, loosed healing, and so on. But all our best efforts didn’t seem to make any difference.

Have you been there before, where you’ve tried everything you know to do and nothing worked?

I continued to sing, “I will linger, I will stay, in Your presence, day by day, till Your likeness be seen in me.” As I immersed myself in my Lord’s love for me and my family, I felt as if His presence had come into the room and begun to saturate it. I felt His amazing peace sweep over my heart and ragged nerves, and all my fears and anxieties about Jessica began to melt away. He became bigger than the sickness, than the lack. As I continued to let praise go up to the Lord, Jessica even awoke, smiled at me and fell asleep again. And when she got up the next morning, she was completely well!

If there was one person in the Bible who had a deep revelation of the power of praise and worship, it was David. David, whom the Bible describes as a man after God’s heart (Acts 13:22), wasn’t just a giant slayer and great king. He was also someone who really knew how to praise and worship God, especially when he was feeling downcast, lonely, or fearful. The author of many beautiful and Spirit-inspired psalms in the Bible, David constantly sang of the Lord’s goodness and mercy. He habitually reminded himself that God was greater than every enemy he was up against and that God was always watching over him:

But You, O Lord, are a shield for me, my glory and the One who lifts up my head. I cried to the Lord with my voice, and He heard me from His holy hill.

I will praise You, O Lord, among the peoples; I will sing to You among the nations. For Your mercy reaches unto the heavens, and Your truth unto the clouds. Be exalted, O God, above the heavens; let Your glory be above all the earth.

This lifestyle of praise, worship, and thanksgiving was David’s key to victory and success.

David was such a worshiper that he even made new musical instruments to praise God with (1 Chronicles 23:5, 2 Chronicles 29:26), and was himself skilled at playing the harp. He saw firsthand and understood the power of anointed, worshipful music to drive distressing spirits away, refresh the soul, and bring mental wholeness (1 Samuel 16:23).

This lifestyle of praise, worship, and thanksgiving was David’s key to victory and success, to seeing the Lord deliver him from his enemies time and again. As David consistently worshiped the Lord, he saw the Lord open doors of deliverance and victory for him, and close doors to his enemies who wanted to take his life or kingdom.

Let Jesus Open Doors For You

It’s interesting to note that in the Book of Revelation, it says, “These are the words of him [Jesus] who is holy and true, who holds the key of David. What he opens no one can shut, and what he shuts no one can open” (Revelation 3:7, NIV).

Beloved, our Lord Jesus is just waiting to open wide doors of His favor, provision, healing, wisdom, and robust life to you. He also wants to shut doors of harm, fear, confusion, and all kinds of bondage in your life. And you receive all these blessings of provision and protection through looking to Him and worshiping Him for His unfailing and unconditional love for you.

Think about that for a moment. Wouldn’t you like Jesus to open to you doors of health, provision, promotion, favor, or divine revelation? Doors that lead to a bright and blessed future for you and your family that no one—man or demon—can shut? And wouldn’t you want Him to also close doors that aren’t good for you? Doors of disease, lack, depression, and strife that no one and nothing can then open?

What this means is that you don’t have to backstab your colleagues or apple-polish your boss to get the promotion. You don’t have to compromise your Christian beliefs to close the deal, or give in to worry and end up in strife as you try to salvage a strained relationship with your teenager. When God opens the doors of favor and wisdom for you, you are getting promoted! You are going to close many deals! You are going to have a wonderful relationship with your teenager!

Perhaps you are someone who has been chronically ill. Maybe you’ve spent a fortune over the years on doctors and medication, but they haven’t brought about the permanent results that you want to experience. Well, if God closes that door of sickness in your life, you’ll not only be healed, but that chronic condition is also never coming back to plague you anymore!

The Transforming Power Of Worship

My friend, if you are living with many worries and fears gnawing at your heart and mind, I want to encourage you to just turn to the Lord and begin to worship Him today. Whatever your fears—fear of not having enough, fear of being rejected, fear of being destroyed by some disease or disaster—you can’t psych yourself out of them. But if you will turn to the Lord and worship Him, something will begin to happen on the inside of you. Your fears will begin to melt away as His love and peace fill your heart. That is exactly what happened to David in the cave of Adullam.

One of the lowest points in David’s life was when he had to feign madness in front of the king of Gath to preserve his life. The jealous and oftentimes insane King Saul had been hunting David like a wild animal and so the latter fled to Gath for refuge. This may not seem like a big deal until you realize that the king of Gath was Goliath’s king!

As David stood before the king, the Philistines around the king began to recognize him as the one who had slain their champion. Terrified of what the king of Gath would do to him, David “pretended madness… scratched on the doors of the gate, and let his saliva fall down on his beard” (1 Samuel 21:13).

Fortunately, his desperate measure to avoid being recognized as Goliath’s killer worked and he was able to flee to the depths of the cave of Adullam. There, in that cold, dark cave, David hid. He was alone, in despair and afraid, and he probably felt condemned too for what he—the champion of Israel—had resorted to just to save his own skin.

Just imagine: You are downcast and fearful, and a whole bunch of distressed, debt-ridden, and discontented men come to you for inspiration and help! What did David do? He turned to the Lord and worshiped Him. He looked to the Lord and began to praise Him with these beautiful words:

I will bless the Lord at all times; His praise shall continually be in my mouth. My soul shall make its boast in the Lord; the humble shall hear of it and be glad. Oh, magnify the Lord with me, and let us exalt His name together. I sought the Lord, and He heard me, and delivered me from all my fears.

As he began to praise and magnify the Lord, God delivered him from all his fears.

Instead of feeling sorry for himself and joining the men in their complaints, David lifted his face heavenward and began to exalt the Lord in song. As he began to praise and magnify the Lord, God delivered him from all his fears. Seeing the glory of the Lord upon their captain’s face and hearing the anointed words that echoed throughout the cave, the men around him were inspired to magnify the Lord with him. And something miraculous began to happen. The same psalm tells us that they too became “radiant, and their faces were not ashamed” (verse 5). 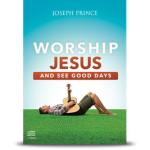 Enjoyed reading this post? Find out more in this MP3 album:

I was a drug addict for 10 years, injecting opiates into my veins every day. Even though I knew that the addiction was destroying me, I did not want to…