A powerful prayer doesn’t have to be long, difficult or prayed in a certain posture. It can just be a simple declaration made in faith. The Bible records that Elijah, one of the greatest prophets in the Old Testament, prayed an “earnest” prayer to God. Would you like to see how this earnest prayer was nothing more than a simple declaration?

James 5:17 tells us “Elijah…prayed earnestly that it would not rain; and it did not rain on the land for three years and six months.” Let’s go to the actual account of what happened in 1 Kings 17:1—“And Elijah the Tishbite, of the inhabitants of Gilead, said to Ahab, ‘As the Lord God of Israel lives, before whom I stand, there shall not be dew nor rain these years, except at my word.’”

Isn’t that amazing? All Elijah did was to declare by faith that it would not rain in Israel, and God considered it an earnest prayer! He honored Elijah’s declaration and there was no rain for three-and-a-half years.

God considers prayers where you declare by faith what you want to see as earnest prayers.

After that, James 5:18 tells us that Elijah “prayed again, and the heaven gave rain.” The word “earnestly” is not used. So let’s see how Elijah prayed this time. In 1 Kings 18:42–44, it tells us that Elijah went to the top of Carmel where he “bowed down on the ground, and put his face between his knees.” Then he sent his servant to see if there were any clouds in the sky. He did this (put his face between his knees) seven times before he got any results—“a cloud, as small as a man’s hand, rising out of the sea.”

Now, man would consider Elijah’s second prayer to be more earnest than his first, but God thinks of it as simply “prayer.” So God considers prayers where you declare by faith what you want to see earnest prayers. To Him, these short simple prayers are intense, powerful prayers!

Please don’t misunderstand me. There is absolutely nothing wrong with long prayers, or assuming a posture for prayer. Jesus Himself was known to go away from His disciples for periods of prayer. In the garden of Gethsemane, He fell on His face in agony as He prayed. There is a place for long prayers when your heart is troubled and you just want to pour out all your hurts to the Lord, or when you just want to be in His presence and tell Him about your day.

But don’t ever think that you must pray long or hard prayers to get God to hear you and to convince Him to move on your behalf. In fact, while you see Jesus coming against the Pharisees for praying long, pretentious prayers (to be seen and heard by other men), nowhere in the Gospels do you ever see Him coming against short prayers.

Doesn’t Elijah’s example encourage you? He just made a simple declaration and it was a powerful, effective prayer.

“But Pastor Prince, you’re talking about Elijah! He was an amazing prophet of God, always full of faith. No wonder even a simple declaration produced results. How can I compare?”

My friend, the Bible tells us that Elijah was a man “subject to like passions as we are” (James 5:17, KJV). Isn’t that so reassuring? Do you get angry? So did Elijah! Do you get fearful or depressed? So did he! Are you in faith one moment and in doubt the next? So was Elijah!

After his overwhelming victory over the prophets of Baal on Mount Carmel, Elijah went on to call forth rain for the whole land of Israel, ending three-and-a-half years of parched lands and hardship for the people. You would think he was a man of unshakable faith. But when he heard that Jezebel, the wicked queen who supported the prophets of Baal who were against God, wanted to kill him, he ran for his life! This man of God actually ran and hid in the wilderness and even “prayed that he might die” (1 Kings 19:4). He was cowardly and suicidal. It was a good thing that God didn’t take Elijah seriously then and consider that prayer an earnest prayer!

So don’t be discouraged and don’t disqualify yourself. Don’t ever think that you’re any less of a man (or woman) than any hero in the Bible when it comes to praying and receiving from God. Jesus has qualified you with His blood to pray powerful prayers and to receive God’s powerful help and abundant supply. So just pray, knowing that it is He who has given you the authority. With Him backing you up, all things are possible. Simply believe in your heart that what you pray for or declare will happen, and it will (Mark 11:23–24).

Use Your God-Given Authority

At the Red Sea, when Pharaoh’s army was closing in on the Israelites, Moses cried to God for deliverance. Do you know what God said to him? “Why do you cry to Me?…lift up your rod, and stretch out your hand over the sea and divide it…” (Exodus 14:15–16). The rod here is a picture of the authority that God had already given to Moses. As far as God was concerned, Moses already had all the authority he needed. Moses only had to step up and take charge.

Imagine with me for a moment a highway patrolman responding to an accident scene. He sees long-haul trucks, buses, and cars in disarray. Horns are blaring and people are shouting and screaming. There’s confusion everywhere and…he whips out his cell phone and calls his captain, “Excuse me, sir, we have an accident here on the highway. What should I do?” What do you think his captain will say? “Use your authority and settle things!”

God has already given us the authority to take charge and speak in the name of Jesus.

And when he does, when he steps up and takes charge, he’ll find that the long-haul trucks and buses may be many times bigger than he is, but they will have to move when he tells them to. Why? Because the highway patrolman has been given the authority by the state to manage such situations.

Similarly, God in His grace and love has already given us believers the authority to take charge and speak in the name of Jesus. So lift up the name of Jesus by commanding the problem you are facing to leave. It could be a sickness in your body or the body of a loved one. Maybe a spirit of strife is souring relationships in your family or workplace. Or you need the weather to clear up on your coming wedding day, or on the day you’ve promised to take the kids to the zoo. Whatever the need, step up, take charge, and pray. And see how faithful the Lord is when you boldly ask in His name (John 14:13–14, Philippians 2:10)!

<< Read Part 1/3 of How To Pray Powerful Prayers 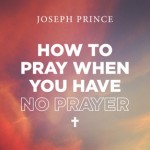 How To Pray When You Have No Prayer

My son, Tim, is a nurse in a rehab nursing facility in Phoenix, Arizona. As the COVID-19 pandemic escalated, we both prayed Psalm 91 daily and hung the psalm in…