But You, O Lord, are a God full of compassion, and gracious, longsuffering and abundant in mercy and truth.

Have you ever wondered why the Philistines didn’t notice that Samson’s hair was growing again? I believe that it was because they never banked on the fact that Samson’s God is a God of grace and second chances. As far as they were concerned, Samson’s God had given up on him.

My friend, when people give up on you, and even when you give up on yourself, I want to assure you that God has not given up on you! He sent His Son Jesus Christ to die on the cross for your sins and this God of grace will never give up on you.

His arms are wide open to receive you, freely forgive you and restore you!

Just see the spirit by which the father in Jesus’ story of the prodigal son welcomed his wayward son home—“Bring forth the best robe! Put a ring on his hand! Put shoes on his feet! Kill the fatted calf! Let’s celebrate! My son was lost and now he’s found” (Luke 15:22–24). He didn’t say one word about his son wasting his wealth on prodigal living. The father was just overjoyed that his son came back.

In the same way, God has not given up nor will He ever give up on you. The moment you take a step toward Him, you will find Him running toward you to embrace you. And when you enjoy His love and grace toward you, you will find yourself not just in a place of safety and provision (like the prodigal son), but like Samson, your strength and purpose in life will return! 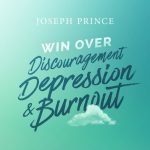 Enjoyed reading this post? Find out more in this MP3

Win Over Discouragement, Depression And Burnout

My husband was admitted to hospital with a serious infection. His white blood cell count went up day by day, and the doctors couldn’t find the right antibiotics. He was…